This was the great journey of back to back Three Years participation. Every year competition was highly challenging and full of pressure and anxiety. And finally, now I can proudly say that “I COMPETE Imagine Cup”. : – )

What Push Me For Imagine Cup

Being an innovative person, I was always curious to resolve problems in some out of the box way. And being a Software Guy I was always trying to build some awesome solution that helps people in their daily lives and make the world a better place. So Imagine Cup was the part of that struggle.
One of the major reason of my Imagine Cup participation is my Mentor Tahir Masood. He was the person who actually push me for Imagine Cup.

Further my Professor Sir Zulqarnain Hashmi, who put his great efforts upon me so now I have complete in Imagine Cup for three times.

First time I participate in Imagine Cup 2014 by leading Team SoftwareWarriors with an awesome Medical Project in the WorldCitizenShip Category.

It was the first experience to take a part in a big competition and we learn a lot from that. Also, that provide us the great inspiration about technology and increase our entrust in Innovation and think differently.

Then in Imagine Cup 2015, I participate by leading the Team PAKISTANi with two awesome and outstanding projects in the Innovation as well as the WordCitizenShip category.

That year our projects were extraordinary, outstanding and I must say highly Innovative. Perhaps due to some team issues we were not able to fully complete the both projects. Although we were working on the both projects from 8 months before the competition and we were also taking the part in Imagine Cup different challenges including Pitch Video Challenge, Project Blueprint Challenge and User Experience Challenge. But! Just before the competition our team member left due to their some important responsibilities.
Then first it was the big shock for us. Because if you are planning for something from a long time and you know you are doing an awesome thing but then at the last moment things are going away from you then that is the biggest pain.
But! As the word of FAILURE is unknown to us and I’ve never thought the ‘failure’ from my Professors and Mentors. So I toke the step forward and decided to take the part with all the existing stuff and fight with whatever we had left.
And! On the result of that, our TEAM PAKISTANi was announced among the teams of National Finals.
And you know what! When you’re working hard on something with true heart then that hard work never waist. God definitely give you its reward. And on the reward we were in National Finals.
There were 20 Projects selected for the National Finals and among those 20 projects, 2 Projects belonged to TEAM PAKISTANi. So that is what we called the reward of truly hard work.
But! The true challenge was to take the part in National Finals with some awesome working product. So although we had very limited time for National Finals. So we that as the challenge.

But! then at the same time I got the call from Microsoft Recruiter and she asked to appear in Interviews during the same day… : – O
That time was full of the shock for me. Everything was happening very quickly and I had no much time for anything. But you know what! These are the moments where we are actually tested. That is the actual time when one need to keep his senses alive.
So long story short. During the same day, I take the part in National Finals as well as appeared in the Microsoft Interviews that could change my life. Give my best to every point and get the things done very precisely.
For the National Finals we appear with some functionally ready of one app and for the second app, we only had the back end APIs and some work in the front end. The credit goes to the team members who spends their true efforts and make that happened.
Perhaps we do participate with full power and attention but due to very high level of competition, we were not able to qualify for the World Competition.
But whatever was the result. At least from that we learn how to fight in a big competition and how to control nerves in the pressure situations.

Then we come back again in Imagine Cup 2016 with same Team PAKISTANi with an awesome and outstanding project in the WordCitizenShip Category.
So that time we were coming with full preparation. As this was my last participation in Imagine Cup so I fully kept my horses ready before the competition so I could take my team to advance round of the competition. 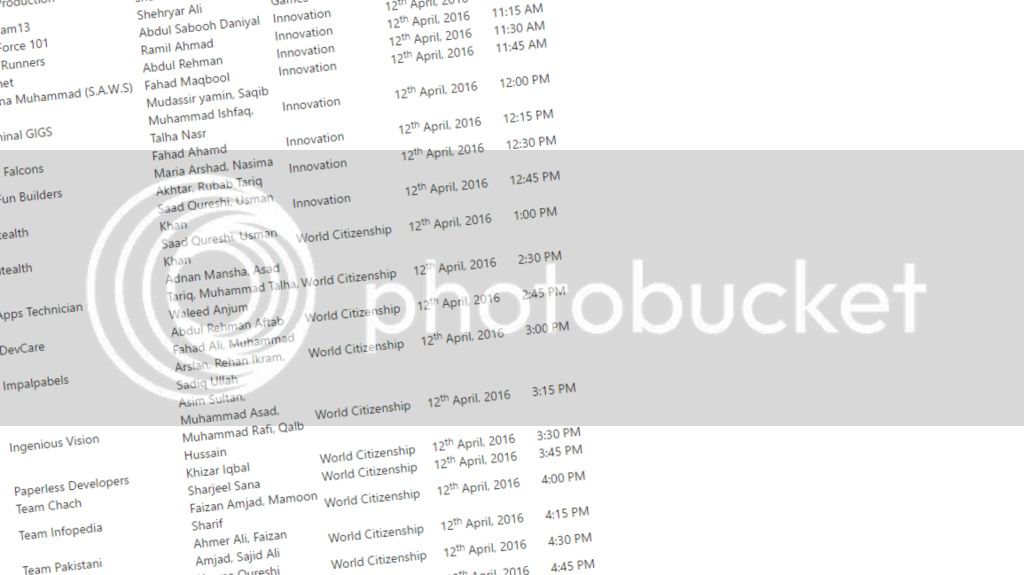 But there are few things in which we don’t have our control. On that year, the management poorly manages competition schedule. On the other hand, I was stuck on the medical issue at home. The Regional Finals Schedule was announced just the evening before participation. So we don’t even get the time to reassemble and do a full participation.
And then during the Demo, Server didn’t respond the APIs call hence the demo does not run properly. And when the Nationals Finals announce then our team was not the part of that.
That was really Sad for all of us and everyone was really disappointed because everyone really struggle hard for it and at the end we were not able to make it successfully.
But whatever the result was, we did give our best. And this is the part of the game. At least we catch lots of awesome memories those stayed with us throughout our life…

Really Thanks to Team SoftwareWarriors and Team PAKISTANi, It was great to Lead both teams. Thanks to Every Single One who was the part of the Teams. Together we fight really well and spend some most memorable moments with the higher level of work.

So, if you’re a Dot NET developer and you are looking to do JumpStart with JAVA

LinkedIn is one of the most used Professional Social Platform. There are more than 500 Million

View all
Warning: Invalid argument supplied for foreach() in D:\home\site\wwwroot\wp-includes\translations.php on line 1445

Khadim Al-Haramain Al-Sharifain Built an MVP of a cognitive platform name “Khadim
So, after a very long time, I got a chance to take
So after having a wonderful experience from 17th Softcom 2016, we were back again
The Hult Prize is a massive (650+ Universities) global platform for student-led
If you suddenly arrive at a place where people are working in
Go to Top